So, as with any hobby that involves ‘equipment’, there’s that temptation to get hung up on all the cool toys, right? And then take pictures of them all dolled up and arranged just so…Well, I’m not going to pretend that I don’t breath-and-sleeve-shine my scope with a twinkle in my eye, but shucks, if you want to see a picture of a 6″ reflector, you’ll just cruise by the Orion or Celestron or Meade website and then wishlist yourself into a coma from time to time won’t you. (not saying I’ve been there–or am I?)
So anyway, I think the thing that interests me more than anything else is not just the splashy gadgets, but all the grunt tools too, and how they’re used or transported and organized and then subsequently abused and possibly brought to ruin…I don’t know. Which brings me to some of my sparklies and not-so-sparklies. A disclaimer: I wanted to shoot this stuff outside on the front walk where I do most of my observing, but it was really cold tonight. Really. So I’m asking you to pretend this stuff is outside. When I get some time, maybe I’ll clone in an outdoor background to top off the effect.
First things first, here is the center of operations, the Orion Skyview Pro 6LT, with the tub I pack the parts in, the eyepiece & fragile item tool case, and the too-small paperwork table. 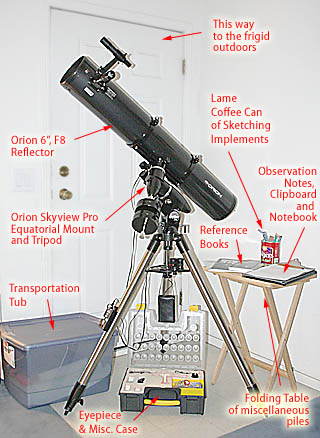 Now for transporting this stuff, the rubbermaid tub has been great. At the suggestion of Tom W. at Cloudy Nights, I invested in the tub with some 2″ thick sheets of foam that I cut to fit in the tub and divvy it up into 3 layers:
Bottom Layer: 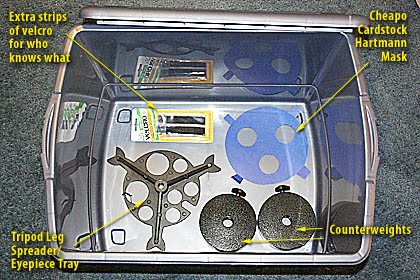 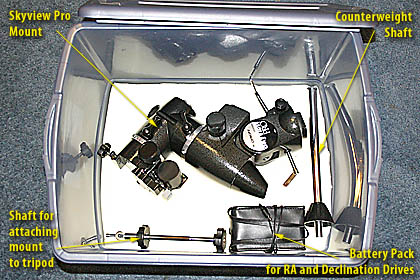 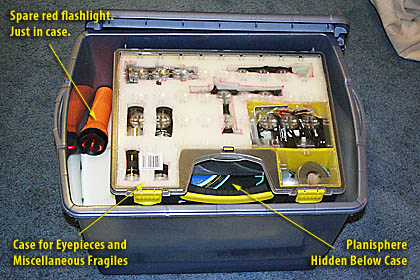 As for the case for eyepieces and miscellaneous scratchables, I used some of the extra foam and layed down a bottom layer, and then overlayed it with a second layer of foam that I’ve been progressively cutting shapes out of, as I need spots for more items. I picked the case up at Home Depot where I almost grabbed an aluminum style case but thought better of it, what with this age of terrorism fears, and we know how any respectable mass murderer will be sure to carry his vials of plutonium in a metal case (I am nothing, if not influenced by the media). So here’s how I ended up arranging things: 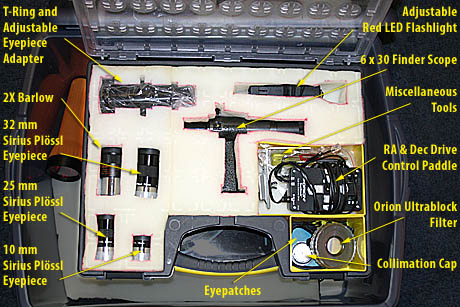 Next in line are the sketching tools, which I’ve been carrying around in a coffee can so far, but I’ll splay them out for ease of identification. 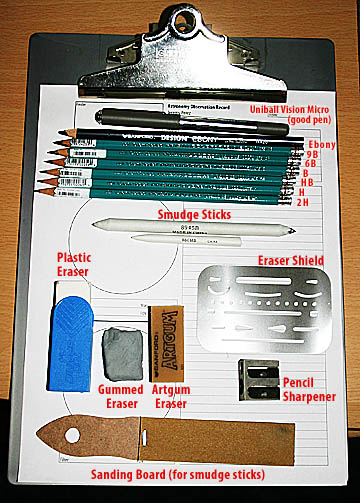 I’m considering getting a nice slim plastic case for all this stuff, because I’m starting to think the coffee can is a little pathetic.
And lastly, my cold-weather get-up: 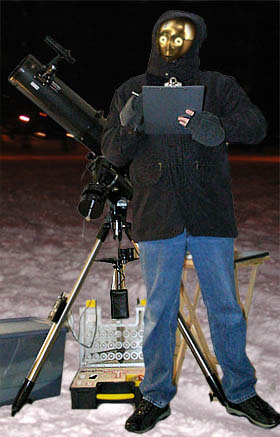 So that’s the tool tale so far.
(also, that snow background up there is fake)
Jeremy