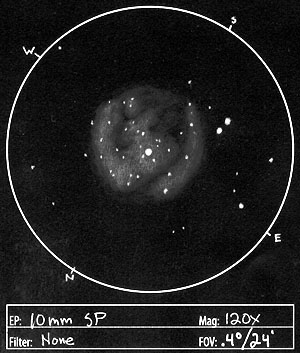 M11 holds a special place for me. It was the first deep space object I viewed through the new telescope–besides M45 & M31 which I had seen before. It was very exciting to see something with my own eyes that prior to that night I never even knew existed. It was a symbol for me of what else lies in the sky that I don’t yet know about. Beautiful. A striking collection of stars. I revisited it this night under less than perfect conditions. It was diving into some of the worst light pollution from my home vantage point. Oh, and the moon was starting to rise. It demonstrated dense and mottled granularity, with numerous resolvable stars winking in and out across the surface. (Did I mention seeing was really bad too? 3/10. Right.) Anyway, one bright star dominates the center of the cluster, and 2 others close stars reside just outside to the SSE. (It should be noted that these bright stars are actually foreground stars, and aren’t part of the cluster.) The overall shape of the cluster is circular with a central cloud surrounded by a gap, and then a rough ring of stars. OK. I know I’ve said this before, but once more for emphasis: to me, the “Wild Duck” name doesn’t just look like a V-shaped ‘flock of ducks’, but actually looks like a duck raising it’s wings to take to flight, with the head at the SW side of the central concentration of stars, and the wings curling around on the NW and SE sides. The dimension of the main body of the cluster appeared to be 7′ across.

M11 is one of the richest and most compact of the open clusters. It is 6,000 light years away, and contains around 2,900 stars. If our planet were in the midst of this cluster, we would see several hundred brilliant first magnitude stars scattered across the night sky. Amateur astronomy would probably be pretty tough in a sky so brightly lit at all times. M11 was discovered in 1681 by Gottfried Kirch, first resolved into stars in 1733 by William Derham, and then included in Charles Messiers catalog in 1764. Its age is currently estimated to be 250 million years, and it is receding from us at 22 km/sec.