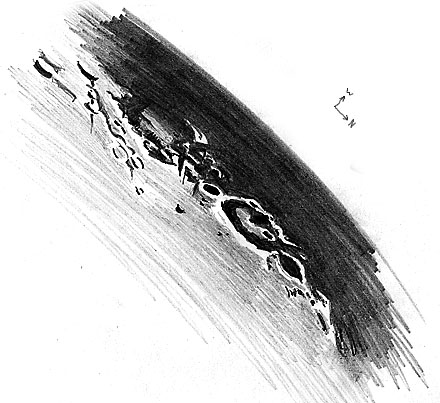 This was my first attempt at a lunar sketch. I had no idea what I was looking at until later. The largest crater at South is Grimaldi. The small but starkly lit crater north of Grimaldi is Lohrmann, followed by the large Hevelius with its distinct central peak, and finally the almond shaped Cavelerius. The terrain between Grimaldi and Lohrmann under this lighting, gave the appearance of an X.

Grimaldi crater, is noted for its very dark basin, which is strangely darker than surrounding lavas of Oceanus Procellarum. It’s said to even be visible under earthshine on a 4 or 5 day old moon, although I haven’t yet checked for this myself. Grimaldi’s inner flooded basin measures some 220 km in diameter, but there is a faint outer wall that brings the overall diameter to around 430 km.

Lohrmann crater measures a dainty 31 km across, while Hevelius weighs in at 106 km and Cavalerius measures 58 km. I found a wide variation in measurements of these craters, so these figures may not be as precise as I wish they were. The area immediately to the northeast of Hevelius and Cavalerius, Planitia Descensus, was named in honor of the first soft lunar landing, which was made in 1966 by the Russian probe Luna 9.

One Reply to “Grimaldi, Lohrmann, Hevelius, and Cavalerius Craters”